I have just finished a fascinating book (in Geek) edited by Spyros Sakellaropoulos and Manolis Houmerianos which publishes for the first-time original texts by the legendary Communist leaders, Charalampos Vatyliotis (Vatis) and Costas Skeleas (Christodoulidies) as well as official documents commenting on the position of the party during the uprising. The editors believe that one of the latter documents was authored by Ploutis Servas (Ploutarchos Savvides), with the pseudonym Georgios Nisiotis (which means ‘Islander’) and another was authored by ‘Panov’, Stylian Triantafilov (Stylianos Triantafyllou) who was a Pontic Greek who was, according to the editors, a high-ranking officer of the Comintern at the time.

The editors (and authors of the long introduction) are rigorous scholars who take meticulous care of the material they are presenting.

Chapter 1 (pp. 11-18) introduces the documents which are the main sources for the book as well as the previously available references and testimonies. A crucial source is a four-page letter to the Central Committee of AKEL by the Greek veteran communist and journalist Orfeas Economides (9/8/1976) some 35 years after the events, as well as two related unpublished texts by AKEL: (1) The text ‘Essay on the history of the KKK-AKEL’ (‘Δοκίμιο Ιστορίας του ΚΚΚ-ΑΚΕΛ’) approved by the Central Committee of AKEL, authored by Minos Perdios in 1968, contemporary and originally close collaborate of Ploutis Servas but who later became one his arch-rivals in Limassol and played a key role in the ousting of the Servas as General Secretary in 1945. (2) The text ‘History of the CCC-AKEL, from the beginning of 20th century to 1981’ (Ιστορία του ΚΚΚ-ΑΚΕΛ, Από τις Αρχές του 20ου αιώνα μέχρι το 1981) authored and approved by the party leadership in 1985 that was meant be the official history of the party, authored by party historians and approved by the CC of the Party, but never published in the end as the interparty rivalry during perestroika in the leadership led to split in 1990.

Chapter 2 (pp. 19-26) is valuable as it provides a short biography of the four protagonists in the ‘trial’ of Vatis and Skeleas, in 1932 when they were in Moscow.

Chapter 3 (pp 27-88) provides a very interesting and well-researched summary and analysis of the documents in light of the various other sources available. There is also acritical evaluation pp. 88), which contextualizes the texts in the epoch, not only in Cyprus but at a global level). It is a work of scholarship that makes a serious contribution to the knowledge, based on evidence on the ground. The editor gathered and read through almost all available local and global material on the subject.

Chapter 4 is a truly fascinating section: ‘The documents’ (pp. 89-198). This is a treasure for anyone who is interested in what the testimonies of the communists of the 1920s and 1930s stood for and how they were treated by the Comintern (at least up to 1932). One can see the revolutionary zeal, the political brilliance, as well as the blind spots, flaws, and failures of their analysis of the class situation and their political and ideological manifestation in a country like Cyprus. Vatis, Skeleas, and Servas are interpreting the 1931 uprising by attempting to make sense of politics using class analysis as the key vehicle for interpreting history. However, at the same time, it is apparent today how reductionistic and often economistic ways of reading the world that somehow assumes ‘automatic’ representation in politics without ideological mediation is problematic in interpreting political events: the ‘jump’ from an abstract reading of socioeconomic forces to concrete political situations, using ideological tools rather than scientific tools of analysis is a flaw that comes out.

As for the protagonists, we see here how the context is merciless, which may perhaps explain, at least in part, the unfair accusation of each other are thrown about in the apologies of each. Also, in this context, the role of Servas here is not an ‘innocent’ one, nor are the criticisms against the leadership of the Cypriot communists without their ulterior motives. After all, let’s not forget the times and the political context of the USSR when Stalin took control – this is 1932, before the 1936 show trials.

I chose to write this text in English because I think that our Turkish-Cypriot comrades must hear about this. This is a truly valuable text that must be translated into both Turkish and English.

Important to mention is that there are two names of Turkish-Cypriots that the editors have traced as two leading communists that Vatis met on 10 august 1931: Asim Aziz Buli and Ahmet Hulusi. The latter became an informer and a witness in the trials against Communists (Vatis and Anthias). There were also at least 20 Turkish-Cypriot communists, even though Hulusi in trial claims to have recruited 200 Turkish-Cypriot members (p. 101). This is an issue to be taken up by T/C researchers!

It must be noted that very little has been written on the subject. A very important study of Yiannis Lefkis (Yiannis Papangelou, 1899-1991) ‘Roots’ (Ρίζες) published in 1984, who was a Limassol-based communist intellectual who participated in the founding of the communist party in the 1920s is an important source. However, again it was written some 50 years after the event. There are various memoirs published which are valuable, but again they were written many years later and are rather selective due to the failings of memory, notwithstanding the possible deliberate choices about what to emphasize, remember and forget.

Important is the small study of the historian Costas Grecos, ‘The October uprising and the CCC’ (Τα Οκτωβριανά και το ΚΚΚ) in an important study by a professional historian. Yiannos Katsourides has published a book in English text but it is problematic because of his treatment of the pioneering communists, essentially as ‘heroic fools’: He uncritically adopts the branding of the pioneers as ‘sectarian’ and ‘immature’, a label that the later leadership adopted to belittle them the justify their subsequent and mistaken nationalistic turn towards ‘Enosis’ in the 1940s. Recently some other texts on nationalism and communism have appeared in English I intend to evaluate in another post.

There are some issues of interpretation of the book (chapter 3) that I would take up with the authors:

(1) The authors are correct to note that ‘national liberation' (particularly under colonialism) is not devoid but contains crucial class-social dimensions. However, they seem to overstate the revolutionary or progressive elements of the ‘Enosis’ question in the context of Cyprus: They seem to understand the slogan of ‘Enosis’ as the resolution of the national question in Cyprus in a similar way to any other Greek island, even though to be fair, this does not make them in any way less rigorous in their analysis. At one point they seem to sympathize with the view that the few who were expelled from the KKK as ‘liquidationists’ (Russian liquidationism: Ликвидаторство) for wanting to compromise with nationalists or their underestimation of the potential for bi-communal relations in building socialism which would mean opposing Enosis.

(2) They seem to undervalue the conditions under which the ‘apologies’ of Vatis and Skeleas were written. Following the October uprising and they were arrested and exiled to the UK, where they both escaped to flee to the USSR - they did this presumably voluntarily. However, the exact nature of the procedure during the Comintern ‘hearing’. but what were the conditions and under what terms did they issue their ‘apologies’ as to what had happened in 1931? Of course, the editors are spot on to note the broader polarisation and the vicious attacks between comrades during those tough times. However, I am inclined to agree with Costas Grecos who designate the procedure essentially as a trial: this explains the virulent attacks, often unfounded or unfair between the Vatis and Skeleas. Also, it explains why and how Skelas was banished from politics, and Vatis who was a brilliant communist leader was sent to work agronomist in Siberia.

Overall, I consider their research as exemplary, meticulous, and well-argued. The book must be read, discussed, and translated! 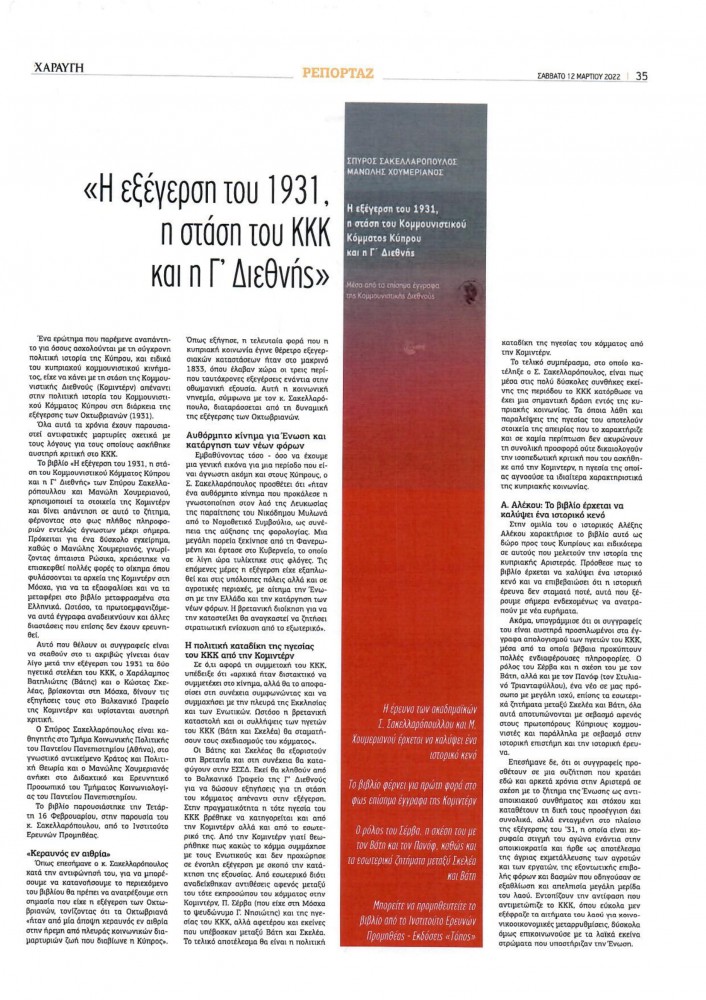